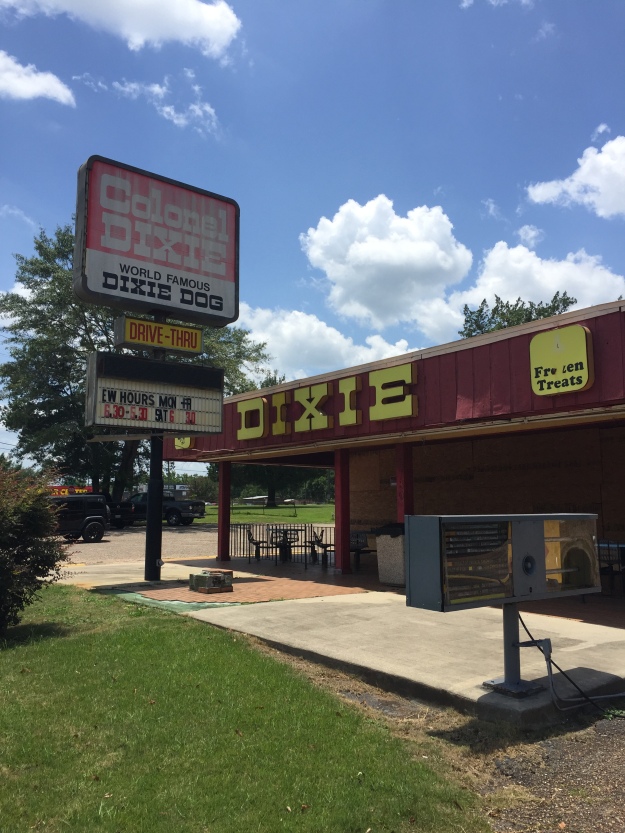 The last Dick, on Government Boulevard. Photo by Caine O’Rear

Not long after moving back to Mobile, in the early days of this cruel and wanton summer, I made a pilgrimmage to the last-standing Colonel Dixie in my hometown.

Colonel Dixie, or “The Dick” as it was so warmly known, was a local, homegrown approximation of McDonald’s (who once sued the company for trademark infringement) and home of the beloved “Dixie Dog.” This particular location had apparently closed down a few years ago, but the building remained, standing like some crooked monument to the franchise’s faded glory.

Colonel Dixie was a local instition throughout the ‘70s, ‘80s and ‘90s.  It carried a history as rich and piquant as its beloved “Dixie Dogs.” The owner, a brash, redneck Mobilian by the name of Paul Leverett, had his wife murdered by a hitman in the early ‘80s so he could marry his mistress (“Phyliss”). Mr. Leverett was convicted and eventually murdered in prison.

A child of the Springhill neighborhood in West Mobile, my local “Dick” stood on the corner of Old Shell and McGregor. It was the regular meeting place after “ballroom dancing” class on Mondays in the sixth grade. Later, when you reached driving age, you’d meet up at there to find out where the party was that night. Sometimes, when the scene was slow, you would just hang out in the lot, smoking and drinking and maybe listening to Harrison pick an Allman Brothers tune, until a cop showed up and the Broncos and Blazers scattered like spooked horses.