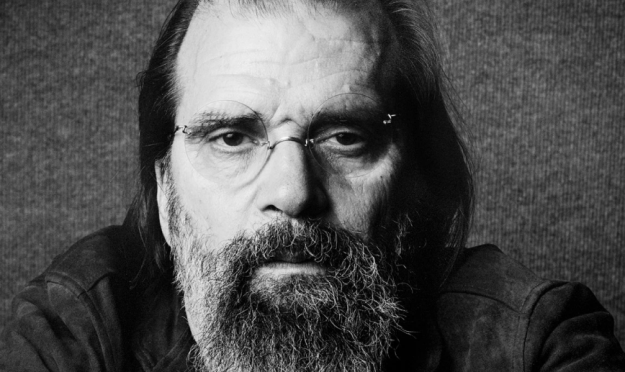 Beneath the veneer of his country-rock stylings, the early work of Steve Earle is shot through with moving descriptions of working-class life. His stirring debut album from 1986, Guitar Town, is haunted by characters hopelessly mired in small-town and rural America, barely scraping by in landscapes that are as bleak spiritually as they are impoverished. On the title track, Earle writes about his own life, with a deft nod to Hank Williams: “Nothin’ ever happened ‘round my hometown/And I ain’t the kind to just hang around/But I heard somethin’ callin’ my name one day/And I followed that voice down a lost highway.” It’s a nod, of course, to Williams’ classic “Lost Highway,” a song written by Leon Payne.

This image of small-town life and the urgency to leave it behind is as blue-collar as it is timeless Americana. But Earle’s characters are not so much conquered by fate as embattled by the forces of culture and economics — and he returns to these subjects for his latest project, Ghosts of West Virginia, out Friday. In these early works, there is the distance between aspiration and reality, and it is here where the struggle to survive with some semblance of meaning intact is maintained. On the song “Someday,” a Springsteen-esque anthem from Guitar Town, Earle relates the tale of a young man who pumps gas by the interstate yet yearns to know “what’s over that rainbow.” In “No. 29,” a tune from Earle’s sophomore album Exit O, a middle-aged man is sustained by little more than his glory days on the gridiron, which he relives every Friday night when he watches the town’s star tailback, wearing the narrator’s old jersey number, play at the local high school. Early Steve Earle was country music, all right: songs about the frustrated working man and the tender mercies that keep him going through hard times. But in Earle’s case, it is country music written by someone who knows the city just as well.

Visiting with Mackey Sasser in Lynn Haven, Florida. Circa ’89.

The latest album from the Strokes ends with a song called “Ode to the Mets,” an affecting closer that has me thinking about one of Shea Stadium’s forgotten sons.

That son would be Mackey Sasser, a Georgia country boy who, after replacing Gary Carter behind the plate in 1990, became the first Mets catcher to hit over .300. Sasser, who played for Pittsburgh before finding his home in New York, had a loping, old-timey sort of swing, with the ability to hit for power as well as average. He had a cannon for an arm and was the first Met to throw out speedster Cardinal Vince Coleman on the base path.

Mackey married my first cousin’s childhood best friend, and my brothers and I got to visit him at his home in Lynn Haven, Florida, just outside of Panama City. His dog was named “Mookie,” after Mets centerfielder Mookie Wilson. We hung out, tossed the ball, and hoped some of that big-league pixie dust would settle on us.

Not long after our summit, Mackey’s career took a dark turn. Midway through the ’90 season, Sasser began to have trouble throwing the ball back to the pitcher from home plate. Without fail, he would double-clutch the ball in his mitt – a malady that would come to be known as “Mackey Sasser Disease” – allowing opposing runners to execute delayed steals. Sasser eventually lost his starting gig and became the subject of much ridicule. Daryl Strawberry, no stranger to confrontation and the ringleader of the team’s wild boys faction, taunted Sasser about it one night and the two came to bloody blows.

Today, Sasser says the problem began during AAA ball when he injured his right shoulder after getting hit with a foul tip. To make matters worse, his coach would fine him every time he double-clutched, adding insult to injury. Mackey overcame the problem, but the demon returned after a home-plate collision with the Braves’ Jim Presley during the ’90 season.

Today, Sasser coaches baseball at his alma mater, Wallace Community College, in Dothan, Alabama. Whenever I hear “Ode to the Mets,” I’ll forever think of the Georgia boy who wore the cursed No. 2., a former boy-prince of Queens who gave Met fans some real fireworks for a time.