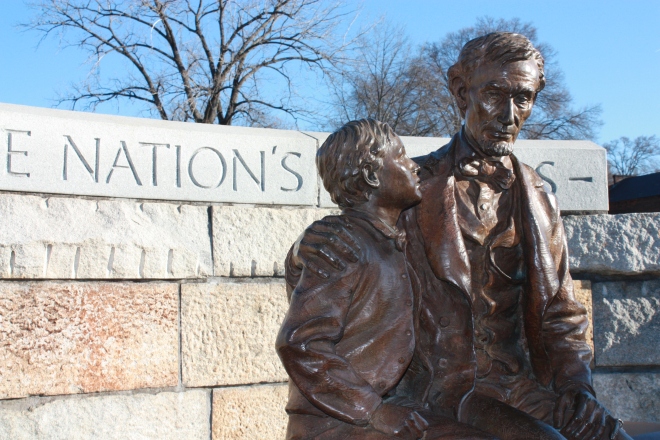 On April 4, 1865, two days after Union forces had taken Richmond, Abraham Lincoln arrived in the fallen Confederate capital with his son Tad. The city’s black residents gave the president a hero’s welcome, while the city’s white population greeted him coldly.

Lee surrendered at Appomattox five days after the Richmond visit; Lincoln would be killed less than a week after that. I was always struck by the fact that Lincoln took Tad with him to Richmond. He had to have known there was a risk of assassination (he only had a few sailors with him for protection), but there was something there that he wanted his son to see, and for him it was, perhaps, worth the risk.

Today, a bronze statue of the two, which was unveiled in 2003, sits at the Richmond National Battlefield Park Civil War Visitor Center. The president has his arm wrapped around his 12-year-old boy. Behind him, etched in stone, are the words: “To bind up the nation’s wounds.” The phrase is taken from Lincoln’s Second Inaugural Address, delivered in March 1865. #blacklivesmatter